France for less than 10 Euro 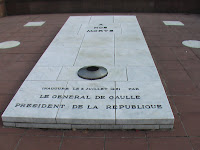 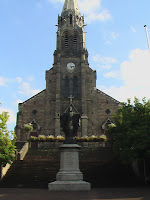 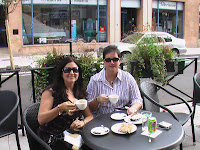 We’re staying in Germany, getting ready for a busy day of media and speaking on Monday. But when we realized that France was only an hour away, we decided to jump in the rental car and go to France for dinner!
We came to the cool village and got lost and found a fabulous French Cafe and Pastry Shop where we sat to rest our wayward bones while drinking Cafe Au Lait and dining on apple pastry and meringues. It was a terrible hardship for which we paid 9 Euro. Then we had an hour to kill before the restaurant was (allegedly) to open and I saw a church steeple whose bells chimed on the quarter hour. We set out to find said church and walk off the pastry and to take our minds off of the fact we were lost in France among people who must not ever learn we are Americans.
We found the quaint church and admired it greatly and then noticed a tombstone. Much to our surprise, here is what it said: Le General De Gaulle, Presidente de la Repulique! We stumbled onto the President of France’s tomb outside the church. Apparently he refused a state burial and was entombed in his home town–the village we visited.
At any rate, when we got back to the restaurant we discovered that the French don’t open their restaurants on Sundays in this small village. So we went back to Germany. We saved tons of money on dinner and THAT is how we did France for less than 10 Euro!
Au Revoir
Ellie Kay
Le America’s Family Financial Expert (R)
www.elliekay.com
Share this
0 likes
Related Articles