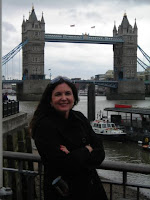 After our fab time with the Heroes at Lakenheath and Mildenhall, we had two nights in London. We searched a number of websites including http://www.priceline.co.uk/ and http://www.lastminute.com/ we found some great hotels but with only less than 24 hours notice, the price was higher than we wanted to pay. Then we just decided to go plain vanilla–and googled “Hotels” and “Heathrow” as we needed to stay near the airport. We found a fabulous quaint hotel for only $50 pounds per night (around $100) and and saved about $75 per night off of the lowest (acceptable quality) hotel on the websites mentioned above. This hotel was where George Orwell lived and taught school before he wrote “1984” and “Animal Farm.” There was a delightful woman named June (she says, ‘not July’) who kept giving us a hard time with her quick Cockney wit while alternately calling us “love.” They served terrible coffee and wonderful tea.

We took the underground (the ‘tube’) and learned to “mind the gap” (the space between the train and the platform). By paying a day pass ($13.4 pounds or $25), we were able to travel to and from our hotel all the way in Heathrow and still be only five minutes from our terminal for the morning flight the next day. We took the “Original Bus Tour” http://www.theoriginaltour.com/ which provided us rides on the open topped double decker red buses with tour service absolutely all around London and access to four different routes PLUS a free river cruise on the Thames. We found the best method was to ride a route once, seeing ALL the sites and then hopping off on the next time around at the sites you want to see. We stopped at the Tower Bridge and saw the Tower of London and the Queen’s Jewels (of course).

We made sure our credit card companies knew we were touring Europe so that there would not be a block on our cards (in case someone stole the cards and had a holiday on us!). We also negotiated away any conversion fees for our credit card purchases, which made our dollars go further as well.

The end of our day in London was miserable–to be more specific–“Les Miserables.” We went to the half price ticket booth in the theater district and walked around a bit to find the best “1/2 Price Booth” as there are dozens and dozens. We saw this incredibly inspiring quality production in the Queen’s Theater and at the end of the film we were sobbing. We looked around at our fellow audience and the Brits were keeping a stiff upper lip about it and kind of looking at us like “you Yanks are so emotional!” But it was soooo worth it!

Even if we didn’t exactly do London FREE, we did it for a lot less than the average tourist!

All in all, It was a BRILLIANT day, love!