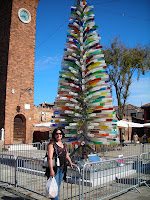 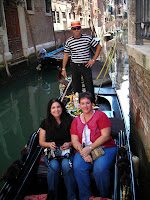 Wow, this has been such a whirlwind trip! We have 12 hour scheduled workdays (that’s the way we like it) and 12 hour fun days (gotta get in all that sightseeing). I kept getting distracted on the way to Italy and kept saying we were going to “Vienna” rather than “Venice.” Poor Wendy had to correct me as I was checking into the flight it Italy or I would have ended up in Vienna!
When we went to Vienna, we were told that the value of the Euro had gone down even more, but we had a budget and believed we could get by on that for this part of the trip as well. The key, I think, to finding values in any touristy area is to “get lost” in the heart of the city and explore the shops that are not as well known. We found as much as 50% off on the same items by doing this.
One of the things we knew we wanted to do was to ride a Gondola and on our first trip around the city we had a large Gondola driver with gray hair and an obvious love for pasta (i.e. a beer belly) shout out to us $12 each! We passed, hoping to find an “appropriate” gondola driver. You know, one who looked like the male lead in “Under a Tuscan Sun.” When we got lost in the center of the city, we were not only rewarded with great values in stores, we were also rewarded with a more than appropriate gondola driver. When we turned a corner and saw the gorgeous gondola and the driver, he said, “80 Euro” (about $120 for both or $96 MORE dollars than the other option.) Well, as smitten as we might have been with the prospect of having “The Top Ten” of Gondola drivers, we were not so taken that we were going to pay too much for the right. We negotiated down to a much more reasonable sum and were off on the adventure. As we passed the beautiful buildings on the main canal, our driver pointed out sights and sang Venetian songs. Toward the end of the ride, we passed another gondola and I heard Wendy say “Look Ellie, there’s the $12 gondola driver.” Yes, there WAS a bit of a difference!
The second day of touring, we went over to the island of Murano, where they are famous for glass. Once again, we got lost in the middle of the island and found the best shops. When we were paying for our purchases, we asked about some items on the shelf by the register. They were slightly “damaged” and we couldn’t even tell what was wrong, but bought them for 75%—so cool!
I’m so glad we got to visit Vienna–um, I mean Venice!
Ciao
Share this
0 likes
Related Articles