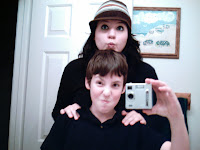 Black Friday (the day after Thanksgiving) was a blast at our house! Bob and I wanted to “sleep in” until 4:15 AM but Bethany and Jonathan didn’t want to wait that late, so they were in the Wal-mart line at 3:45 AM and we joined them at 4:30. Did you know that Wal-mart will match any store’s sale ad–even on Black Friday?
Everyone had their assignment and had different items to snag when the doors opened. I had all the other stores’ loss leaders ads with me and only had to go to ONE STORE to get all of our area bargains. For example, I got a 30GB Zune MP3 player that was on sale at Toys R Us for only $79 and I got it at Wal-mart by showing my Toys R Us ad. One friend, who went to Toys R Us that morning said they ran out before she could get one! I also showed ads to save $300 on a Garmin navigational system (Staples) and seasons of our fave television series, “Monk” for only $12.99 (Circuit City). Of course we took advantage of Walmart’s loss leaders, too, such as an $89 Sony digital camera that is normally $250. Bob bagged a Chicken Dance Elmo (yes, it’s Elmo in a chicken suit) that dances and sings and he saved $20 in the process. Bob had a diabolical gleam in his eye as he thought of our son-in-law having to put up with his sweet little boy pushing that chicken dance button over and over and over again! As Bob says, “Payback is a bummer!”
We were in the store by 5:00 AM and completely done with the bulk of the season’s shopping by 7:00 AM. We spent a total of $350 and saved a total of $750 off of retail! That’s saving twice as much as we spent in keeping with my Half Price Holidays theme!
Remember to de-stress this holiday by making a budget, sticking to it, and scheduling time for the things that matter most (like our annual chocolate house creation at the Kay home).
Happy Savings!
Ellie Kay
“America’s Family Financial Expert”
https://www.elliekay.com/
Share this
0 likes
Related Articles