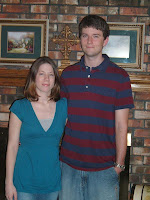 Valentines Day.
Bob gave me a sweet card and a Lladro figurine of a “Bride and Groom Couple” which was beautiful. The male was in a top hat, the female had delicate flowers in her hair. And did I mention they were dogs? Yes. Very cute, it made me howl with laughter when I opened it up, especially since, at that very moment, our dogs were jumping on me and wrestling. fun. fun.

Philip mailed me the sweetest card and signed it “I love my mama.” Bob gave Bethany flowers, a CD and a card and Philip gave her the most wonderful “Sisterfriend Valentine” card, too. I gave the little guys chocolate and a $15 Starbucks gift card. Bethany gave Bob Sees candy.

The little boys did the “Oh, crud! I forgot about mama” routine and then Joshua announced,”Uh, when you can go out to eat, Papa and I are going to take you.” While Jonathan said, “And even BEFORE you gave me this card, I was going to say that I would take you out for a Frap for Valentines.” Yeah, right. I told them that this last minute, oh-crud-I-forgot-so-I’ll-just-think-quick-and-make-something-up-and-hope-she-won’t-notice routine was NOT going to cut it. One day, I told them, when they had wives, they were going to have to have some forethought and at LEAST fill out a card that says, “This card entitles you to a free dinner” or something other than what they did. They smiled sheepishly, hugged me and thanked me for the gifts.

Then there’s Daniel. He had the biggest Valentines Day in the family–a day early. Yes, my baby boy got engaged last night! It was really sweet, he asked everyone’s permission ahead of time (Bob and I, her mom, her dad). Then he took her to their favorite place, the Botanical Gardens in FTW, and at sunset, he walked her over to a fence, got down on one knee and proposed. He said he was nervous and didn’t say what he really wanted to say and he kind of fumbled, but he made it through. She started crying and couldn’t stop. The ring he got her was diamonds and emeralds (her birth stone) and one she picked out. It is beautiful–simple and elegant.

Then they went to eat at the Cheesecake Factory and he gave her my book, The New Bride Guide that I had autographed to her already. On the way home from the restaurant they called me and were punch drunk in love. He was gloating at how suave and clever he was and she was just crying for joy. He’s the one who called and he said, “Well, guess who has been engaged for the last couple of hours?” I guessed correctly. Then I asked to speak to her and let HER tell me how he proposed. She started crying again just retelling the story. I welcomed her to the family, told her she would be a great asset and that we loved her already. I told her that I knew she’d take good care of my baby boy and while he would officially be “hers” now, he will ALWAYS be my baby boy.

When Daniel got back on the phone, he said, “Well, mama, your baby boy did it right!” He was oh, so smug and oh, so happy and just plain drunk on love. But before he hung up he said, “But I’ll always love my mama!”

And so it begins…