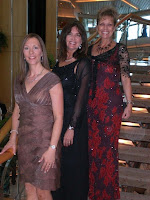 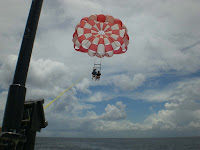 I just got back from the Thelma Wells “Ready to Win” cruise for women where I was a featured speaker. My girlfriends, Brenda and Allison were drop dead gorgeous in their formal night clothing. But don’t let this photo deceive you, we survived some strange adventures before we ended up smiling in a photo!
Brenda and I had to come in the day before the cruise and stayed at a Hilton in Fort Lauderdale. TIP: I used an “best available rate” room special where you prepay, but save over $200 by getting the room cheaper than the local Hampton Inn. Plus, I get frequent stayer points & a free breakfast with my Hilton Honors gold card. When we checked into the room, it smelled like smoke. TIP: We knew you should always let management know and that by asking, we could possibly get a room upgrade. The hotel manager was great! He met us at our room with keys to the PRESIDENTIAL SUITE! The nicest room in the 8 story hotel! When he took us in, it was gynormous, featuring a table for twelve, a full kitchen, a private balcony and several sitting areas. The bedroom suite was off the main room. There was just one insey weensy problem.

He showed us around the suite, highlighting the amenities. When he got to the bathroom, he pointed at some stains on the tile, “Don’t worry about those stains, they are going to replace the tiles later this week. It’s just that a woman died here last night and there was a lot of blood. But they cleaned up all the blood and it’s really no problem.”

I looked at Brenda, “Did he just say what I thought he said and was he kidding?” Looking pale, she nodded her head and whispered, “He said there was a dead body in this room last night.”

We bolted off the main suite and barricaded ourselves in the bedroom area while dreaming of the Sixth Sense and “I see dead people.”
The adventure continued when we got on the cruise and reached our first port–Grand Caymans. We signed up for the kayaking and snorkel excursion. When we arrived it was sprinkling and they announced they only had 6 power scooters for 8 people, so if someone wanted to get 1/2 a refund on their excursion, they could forgo the scooter. TIP: It’s really easy to share a power scooter when snorkeling with a friend. In fact, it’s relaxing to just snorkel on your own, then take a turn with the scooter. We saved 50% in the process.

By the time we paddled out, it was a steady drizzle, but it didn’t keep us from enjoying the snorkel experience around the reef with beautiful tropical fish and bright blue waters! When everyone got back on their kayaks to go over to the shipwreck area, it was raining harder. Then–all of the sudden, the heavens opened up and we found ourselves in the middle of a STORM at sea! The guides were too far ahead of us and couldn’t see us. Visibility was limited and the rain felt like sharp pepples pelting down on our faces and legs. The kayak was taking on water and the waves were swelling bigger and bigger. We positioned the kayak to meet the ways head on to avoid capsizing. That’s when the lightening started. We looked down at our metal paddles and just kept paddling in tandem for shore. It was one of those surreal experiences when you find yourself wondering what your family would do if you were swept out to sea, struck by lightening or put in a psych ward because you freaked out over the trauma.

It took us only fifteen minutes to paddle out but almost an hour to paddle back to the shore. The guides finally got a clue and came back for the other two kayaks that were still in the storm and attached a line to them to get them back safely.

The final day was our big parasailing excursion in Cozumel. We prayed for it to be singularly UNEVENTFUL. We wanted NO more dead bodies or “near death” experiences. Just the intrinsic thrill of flying tandam 600 feet above the water in a parachute. As you’ll see from the photo–we succeeded in our goal, putting the “death” theme to rest in peace!