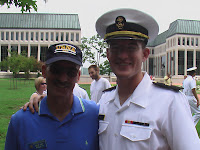 We are a proud military family as many of you know! My hubby became a fighter pilot in the 80s and has loved every one of his 5,000 hours in the air. Philip, our second oldest son, is at USNA(Naval Academy) and plans on becoming a Marine Corp aviator. The next two sons (still in high school) want to go to USAFA (Air Force) USMA (Army) or even USNA. By the time we’re done, we’ll be a joint force (purple) family! But it runs in the family. My dad is a retired Chief from the Air Force and my Grandpa was a bombadier in WWII. In fact, we can trace our roots all the way to the Mayflower (John and Priscilla Alden) and they are peppered with service members.

My profession revolves around money matters but my passion revolves around military families. Heroes at Home, is now in the hands of over 100,000 military members and their families, making a huge difference in lives. I’ve spoken directly to the troops as well as to their spouses everywhere from California to China and from Germantown to Germany. Ellie Kay bylines are in Military Money (Kiplinger), Operation Homefront, CincHouse.com, and Military Spouse. All of this is because I believe in and support our military members. I want to bring that message directly to the troops in Afghanistan and Iraq.

In these travels, I have found listening ears as the presentation seeks to encourage and inspire those who put service before self. I know that the WWII generation has been called “The Greatest Generation” but when I look at the young private, stationed in Germany who has to leave his pregnant wife to go to Afghanistan–and he does so willingly and with honor. When I see the airman who volunteers for his third tour in Iraq, knowing it has the possibility of being his last. When I look into the eyes of a 21 year old woman, who proudly tells me what company she’s with and when she’ll go remote to Korea. When I see this generation making the sacrifices that would have made their great grandparents proud. It’s then that I have to say that we’re looking at America’s Greatest Generation. It’s important that we support them. The men and women who serve in our military today–and their spouses are the greatest. I salute them. I thank them every chance I get–whether it’s on tv, in person at a Heroes at Home event or in the airport. I encourage you to do the same.

I just got back from TRADOC (a major Army command in Ft. Leavenworth) and once again, I saw the greatest generation in action. The Heroes at Home speech I presented is the same one I’ve given to over 100,000 military members and their spouses–one event at a time. I don’t do it for the standing ovations. In fact, I’m convinced that those standing O’s aren’t for me at all. I think that my verbal affirmation of the fact that “America loves you, we’re proud of you and together we’ll be all right” is the reason they stand. Not to single out a keynote speaker, but to applaud the fact that the sacrifices they make have value and meaning–it’s worth it. They stand as a team and as a family.

While at TRADOC, I met a team of people also interested in improving the quality of life among military personnel and their families. In an effort to better serve the military, a research group at the University of Kansas is calling for military spouses to complete a survey. Your anonymous response to this research project will help in the implementation of the Army’s new Comprehensive Soldier Fitness Program.

If you just want to leave a post and thank someone for serving, you can do that here on my blog. With Veteran’s Day coming up next month, I think saying “thanks” to a military member or their family is a perfect way to celebrate!