The Road to Financial Heckie-Fire 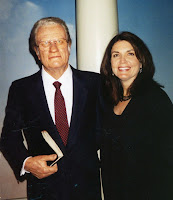 Here’s one of my favorite picks taken a few years ago with the “Pastor to Presidents,” Billy Graham. He’s an amazing man of integrity and in the business of keeping people out of hell.

They say that the road to hell is paved with good intentions. When it comes to your finances, some of these well meaning money moves can actually become major slip-ups that only compound existing financial difficulties. While parts of the economy are looking better, unemployment remains at a rate of 9.7% and this means that many families are dealing with weeks of unpaid leave. Still others are trying to recover what they lost in their investments, home equity and in the stock market. Recently on ABC NEWS NOW, I shared with the host, Tanya Rivero, some advice on how to stay out of the bad place. Here are some things to avoid:

Q. Ellie, one of the primary money sources that some families are using to avoid bankruptcy is to raid their 401 (k), which, you say is a major misstep. Why is this so problematic?

ELLIE: Our parents’ generation tended to work for someone who gave them a pension check for the rest of their lives. This means that current workers may not have been raised with the mindset that they control their own pensions and need to make funding their own retirements a priority. There’s an alarming trend that involves looking at 401(k) accounts as “now” money when it’s really “later” money, that really must be saved for later. While raiding an IRA to avoid bankruptcy is a well intentioned money move, it’s also foolish because if you end up in bankruptcy anyway, then you’ve passed up the benefit you have in the fact that retirement accounts are protected under bankruptcy laws in most states.

Q. For twelve million Americans, their homes are worth less than they owe, which leads us to the next major money misstep that has become more common in the past two years and that is walking out on a mortgage. What are some other options available to families that feel this is their only option?

ELLIE: I would say that half of the people who walked away from mortgages didn’t have to take that path and probably didn’t consider all their options. Providing you still have some income to pay on a house where you owe more than it is worth, the first step homeowners should take is to decide whether their mortgage issue is a short term or longer term problem. For example, if you just got laid off and have no savings or small savings, but the job market in your town is such that you can probably get some part time or full time work to keep money coming in, then you have a short term problem. On the other hand, a long-term problem means you’ve been unemployed, you’ve wiped out your savings and you don’t see a way back into the job market.
The sooner you recognize the fact that it’s a long term problem, the sooner you can put your best food forward to sell your home in a short sale and move into a smaller, less expensive place. That way, you can preserve your capital for a better time.
If it’s a short term problem, then talk with your mortgage lenders and see if they will suspend or lower your payments over the next three to six months until you are employed again. You can go to MakingHomeAffordable.gov, which is a federal government website with the goal of helping families by providing free HUD-approved counselors who can help you modify your mortgage.

Q. In every newspaper and on television, we see advertisements for credit counseling agencies that will eliminate your debt. But you say that debt wipeout scams are a major problem. How can we tell the scam from the real deal?

ELLIE: It can really be confusing because they sometimes advertise as debt consolidation companies, but you need to be extremely cautious because I would say the majority of those advertisements are misleading at best and a scam at worst. If it sounds too good to be true, it usually is. Instead, go to the NFCC.org with is the National Foundation for Credit Counseling. This is a non-profit and free service that you can trust.

Q. An alarming number of Americans, some 19 million of them, have also resorted to payday loans in order to make ends meet. How do these loans work and are they ever a good idea?

ELLIE: These are high interest loans that have an average interest rate of between 390% and 520%. They are marketed as short-term cash advances to help meet emergency expenses between paychecks. But the problem, besides, the interest rate, is that it becomes a repeated pattern and consumers become trapped in this kind of borrowing. Avoid these at all costs, and if you have young adult children, especially those in the military, educate them on the dangers of payday loans since these companies tend to flourish near military bases.

Q. Credit card usage has dipped more than 13% in February and yet almost 15% of American families still owe more than 40% of their income in consumer debt, according to the Federal Reserve. Ellie, you say that another major misstep is ignoring the card balance.

ELLIE: Yes, Tanya, while it’s commendable that credit card usage has declined, it’s still an issue when the credit card is used as a means to spend more than you can afford. This is a strategic error that can lead to financial hell as consumers ignore the balance. The new government mandated box on your credit card bill will show you how long it will take to pay off your balance if you pay only the minimum and how much interest you pay to carry a balance. Pay attention to these numbers, instead of ignoring them, and ask yourself if you can afford that item before you put it on your credit card. Behavior modification doesn’t happen overnight, but eventually, you can begin the climb toward getting out of debt.

Q. One final area that we’ll look at today has to do with trying to fool Uncle Sam. Ellie, you say that this money misstep can cost taxpayers big bucks if they are caught and that there is a difference between mistakes and intent—what is the difference?

ELLIE: It’s really pretty simple. Everyone will make a mistake here and there can be accidental errors on the tax returns of the most honest kind of people. But some folks are looking to save money by “accidentally” misrepresenting large amounts of money. We see them in the news—whether you’re a celebrity or a politician, you still have to pay your taxes. By signing the box on your tax form that you believe everything to be accurate and true on your form, you open yourself up to significant liability. If you’re audited and they can prove that the misrepresentation is intentional, then not only are there penalties involved, but you could also be charged with federal fraud. So pay those taxes, even if you have an extension and call the IRS to set up payments if you cannot pay all you owe.