Red, White and Scammed – Tell Your Military Friends to Beware! 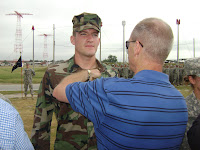 This week on ABC NEWS and KLOVE, I’ve been discussing how
thousands of service members engaged in fighting America’s battles overseas are now encountering a foe here at home. Enlisted men and women are easy marks for sleazy car dealers, insurance scammers predatory lenders, and identity thieves. So pervasive are the rip-offs and so troubling is the debt incurred by military personnel that US Department of Defense officials recently labeled the situation a threat to national security.

We have a long tradition of military service in our family. My grandfather was a bombardier who died in WWII, my father is a retired chief master sergeant in the Air Force, my husband, Bob, flew Air Force fighters for 25 years, our son, Philip, is a senior at the Naval Academy and will to cross commission into Marine Corp Aviation, our next son is headed toward the Air Force Academy next year and the youngest son wants to go to Westpoint and be in the Army. In fact, the photo you see is Bob, pinning on the Philip’s Airborne wings–the very wings Bob earned 30 years ago when he was a cadet at the Air Force Academy!

Q. The DOD has labeled the fraud situation among the military as a threat to national security. How does getting scammed impact lives overseas?

ELLIE: It’s all about distraction. When military members are distracted, whether it’s worry over identity theft or trying to wondering if their spouse is able to deal with messy finances at home—then that’s when accidents happen. Distraction leads to worry which leads to accidents. And when accidents happen, then there is loss of life. So if we want to help save lives overseas, then we can all do our part to protect our military members by exposing rip offs and scams whenever possible.

Q. What kind of paycheck does a typical recruit make & what are some of the questionable ways that local businesses try to get a piece of that paycheck?

ELLIE: They earn about $1800 per month & these paychecks can be carved to bits by bad deals. For example, a computer store outside of Great Lakes Naval Training Center in Illinois employs attractive women to troll for new sailors. Once they get them inside the store, they are pressured into buying a very basic laptop for more than $4000, which is three times as much as the computer is worth. Then they finance the deal and the computer ends up costing even more with the store also making money on financing.

Q. What are some other common ways that the military is ripped off and people should be aware of?

ELLIE: There was recently a multistate investigation launched into life insurance scams that were being perpetrated against military members just before they took off to the Middle East. These scamsters sold soldiers extremely overpriced or misrepresented policies, taking advantage of the emotional situation of leaving families to go into harm’s way. This investigation ended with the companies offering more than $70 million dollars in refunds to thousands of service members. When it comes to life insurance, military members are offered SGLI or Servicemembers Group Life Insurance, which is a legitimate source for low premiums, so there’s really no need to secure other private insurance!

Q. Tell us about the “Red Cross” scam that is getting a lot of attention among military families?

ELLIE: This is fairly despicable, as it prays on the emotions of family members. A con artist claiming to be with the Red Cross will call a parent of a servicemember or their spouse, telling them their loved one has been injured and they need their social security number to authorize help for them. In some cases, they ask for an initial cash payment. Military members need to clear any report of injury through the chain of command or by contacting the base family community services.

Q. It seems that our military is very young, what is the average age of a service member and do they receive any kind of personal finance education as part of their training?

ELLIE: Yes, they are young, in fact, the average age range of military members is between 22 and 28 years old. Of the groups I routinely speak to around the world, I’d say that the average 22 year old has an even younger wife and a baby as well—so it’s a lot of responsibility for someone so young. The good news is that since 2004, service members learn about personal finance as part of their early training. When I go to give my “Heroes at Home” message I teach about finances and also encourage them to use the resources they have available to them on base. Army Community Services, Airman and Family Readiness Centers, Fleet and Family Support Centers—all of these have personal finance counselors there who are ready and willing to give free financial counseling to service members and their families. It’s what I call my $300 tip, because a couple hours with the caliber of financial professional at any of these centers is equivalent to paying $300 to a CFP or CPA.