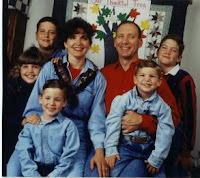 There are some family traditions that are passed along from generation to generation. Then there are others that we establish for ourselves.

Yes, for over two decades now, we have been collecting the following statement from our friends and family:

We print your message on a “leaf” and tape it on to our “Thankful Tree.” At the beginning of November, the tree is bare, but as the season goes on, it gets full of your thanks. We then save each leaf and put it in an envelope marked 2010.

The photo here was our family featured in Woman’s Day magazine from a decade ago. The photographer took 8 rolls of film just to get this one shot. There was an entire roll, where Joshua (the youngest) was missing and we didn’t notice. We found him in the other room, playing with his army men because he was bored with the photo shoot.

So please don’t forget to add what you (individually or as a family) are thankful for this year!