Til Debt Do Us Part — Money Matters Before You Marry 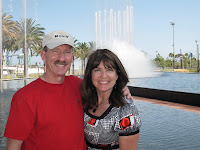 This week is our anniversary and we are celebrating

by going away to the OC, riding segways on the beach & watching a concert called “Rain” (a Beatles Tribute). Hotel is free, segways are 1/2 price and Rain was 45% off!

When I married my husband, Bob, he was a young fighter pilot in the Air Force and I was a insurance/financial broker from Texas. We merged two different professions and two very different philosophies about money. Bob has a lassie faire style, a free spender who lives in the present. I am a structured person, a compulsive saver and always plan for the future. Even though it may seem that this marriage was made in any place but heaven, it has turned out quite the opposite. We’ve been happily merged and married for 24 years with seven children to show for it!

There were, however, a few things we learned after marriage that we wish we knew before the big date.

Talk, Talk, Talk,Communication is the key to dealing with money in marriage. According to a 2008 study conducted by California State University, 21% of couples fight over money daily or weekly. 10% fight monthly and 46% put on the gloves every few months. It’s no wonder that “money arguments” are cited as the number one cause for divorce in America. [[https://www.usaa.com/inet/pages/advice_merging_money]]

If couples spent as much time discussing this critical merger as they do in planning the honeymoon, they would have a great start in their new lives together. That is why it is critical for couples to get premarital counseling that specifically deals with money matters. Each partner comes to a marriage with different money management styles. Consequently, I recommend couples set aside date nights weekly to regularly talk about financial progress. Partners who discuss their views of money and work together to use their financial resources effectively may discover that they actually like the process.

Check, Check, Check, Some experts recommend running credit checks on their spouse-to-be. After all, “‘till death do us part” is the saying, and that means accepting everything about the other person, including any bad debt. On the other hand, if you don’t know how much money your fiancée owes, then the saying could be rephrased to: “‘til debt do us part.” Credit histories should be voluntarily shared among fiancées, preferably in front of a counselor. But you should never run a credit check on your future mate without their permission.

I like to say that “my love is unconditional, but my money is conditional.” It’s important to know about debt before the big date as the mingling of money could have an impact on your credit score. Initially, each score will be different, but if you are added to a spouse’s credit card or vice-versa, then that will have an impact for good or for bad. The merging of all financial resources means that in many cases—for mortgages, home improvement debt, car loans and joint accounts—his credit becomes your credit.

Usually, the bad score will more quickly impact the good score when joint credit is secured. However, it depends on how previous debt and accounts are handled. I do not recommend putting the person with good credit into the debt history of the partner with bad credit by adding her name to his accounts—this deteriorates the good payer’s FICO. But when it comes to future loans, there is a measure of unavoidable mingling. As a personal example, when we moved to CA and had to hook up electricity, with his FICO score the electric company required a $500 deposit. But by using my score we were allowed to establish service with no deposit. We put the bill in my name and in this particular case, it didn’t deteriorate my FICO and it saved us $500!

Yours, Mine and OursWhen two people merge finances, they will need to set up savings, checking and even retirement accounts. It’s important to decide if you will have joint or individual accounts.

There is no right or wrong answer on this one—it all depends upon what the couple mutually agrees to and what works for them. But it is something that should be decided ahead of time. If there are separate accounts, there needs to be full disclosure and accountability for those accounts. I’ve had the unfortunate experience of counseling many couples where one spouse racked up thousands of dollars in consumer debt and the other partner knew nothing about it until it was too late.

However, I’m a firm believer in keeping “mad money” and “surprise money” separate. After all, if Bob wants to give me a surprise trip to Paris for our anniversary—who am I to rob him of that pleasure?

A primary exception to joint accounts is any home based business account or trust funds that were established for children from a previous marriage. Those should definitely be kept separate at all times from a couple’s joint account.