A Grounded Pilot and A Flying Wife 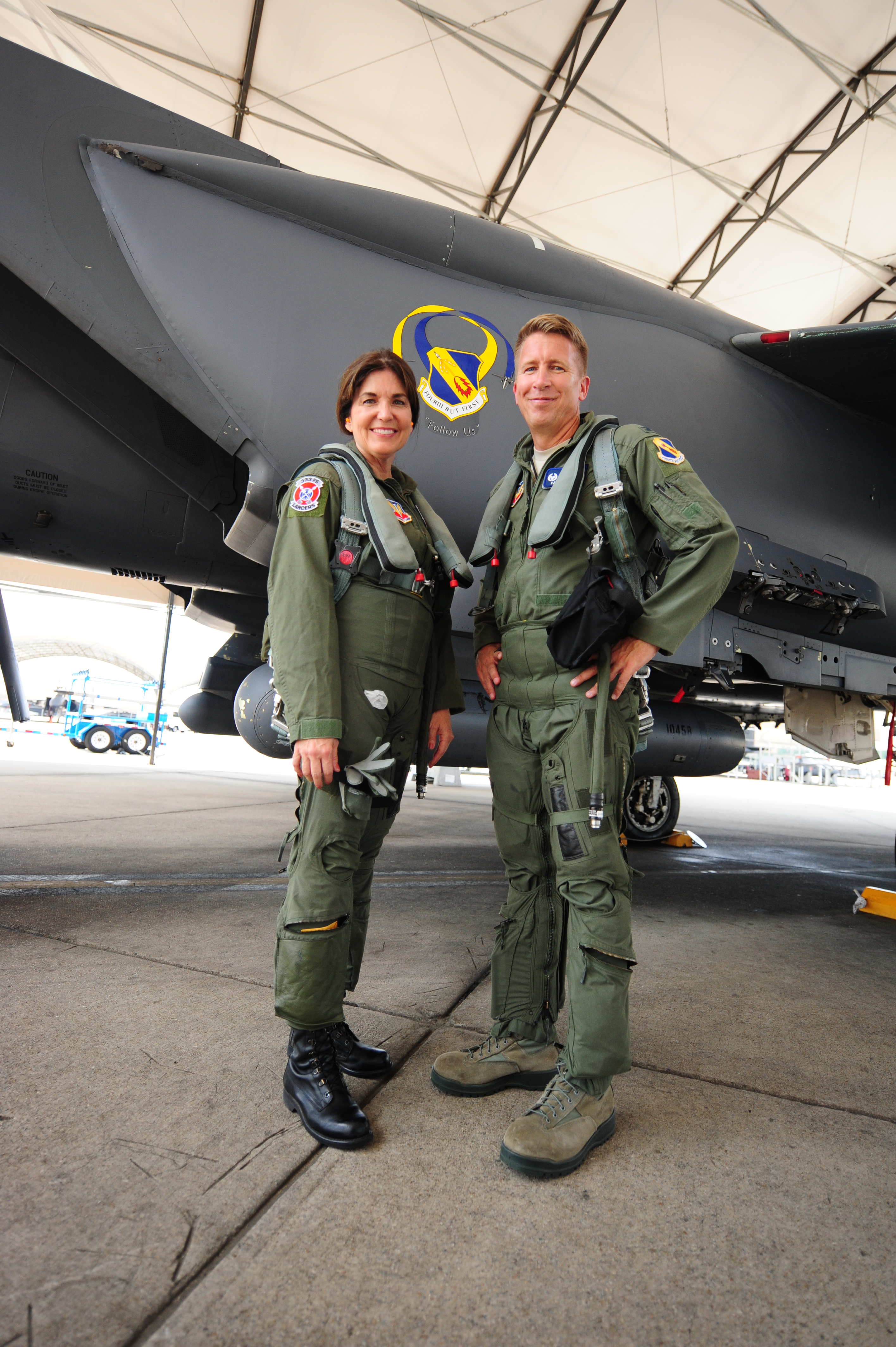 Being married to “The World’s Greatest Fighter Pilot” has its ups and downs, and one of the things I discovered about my man is: His feet are restless while on the ground.

He flew fighters for a decade before I met him and eventually accumulated 4500 flight hours in seven different jets. There’s one phone call that a pilot’s wife always waits for, but hopes will never happen. I got that call two years ago when I was in NYC on business and at a Broadway show. The five minutes it took to check my voicemail during intermission forever changed our lives:

Bob had been in an accident and broken his back.

He punctured his lung, broke four vertebrae and four ribs on a gas and go in Abilene. He had just flown his last sortie: a fluke accident that happened during a routine delivery of a jet.

Bob did recover his health and is able to maintain a pilot’s license, but his back will not sustain an ejection seat aircraft. While he enjoys “flying” the Global Hawk as a civilian contractor and Cessnas as a pilot, but he always gets a sad look in his eye when a fighter flies by. I didn’t understand the depth of his loss until something amazing happened to me.

I got to fly in a fighter.

After bringing the “Heroes at Home” message to military families in 7 countries, at 100 venues, and traveling 300,000 miles to do this, with 500,000 military families reading my work and 1,000,000 military families having seen my presentations and work…the Air Force rewarded me with an incentive ride.
Bob and Joshua were also invited to Seymour Johnson Air Force Base, home of the 4th Fighter Wing and the world’s most lethal tactical fighter: the F-15E Strike Eagle. They flew the simulator, but I was to fly the real deal. 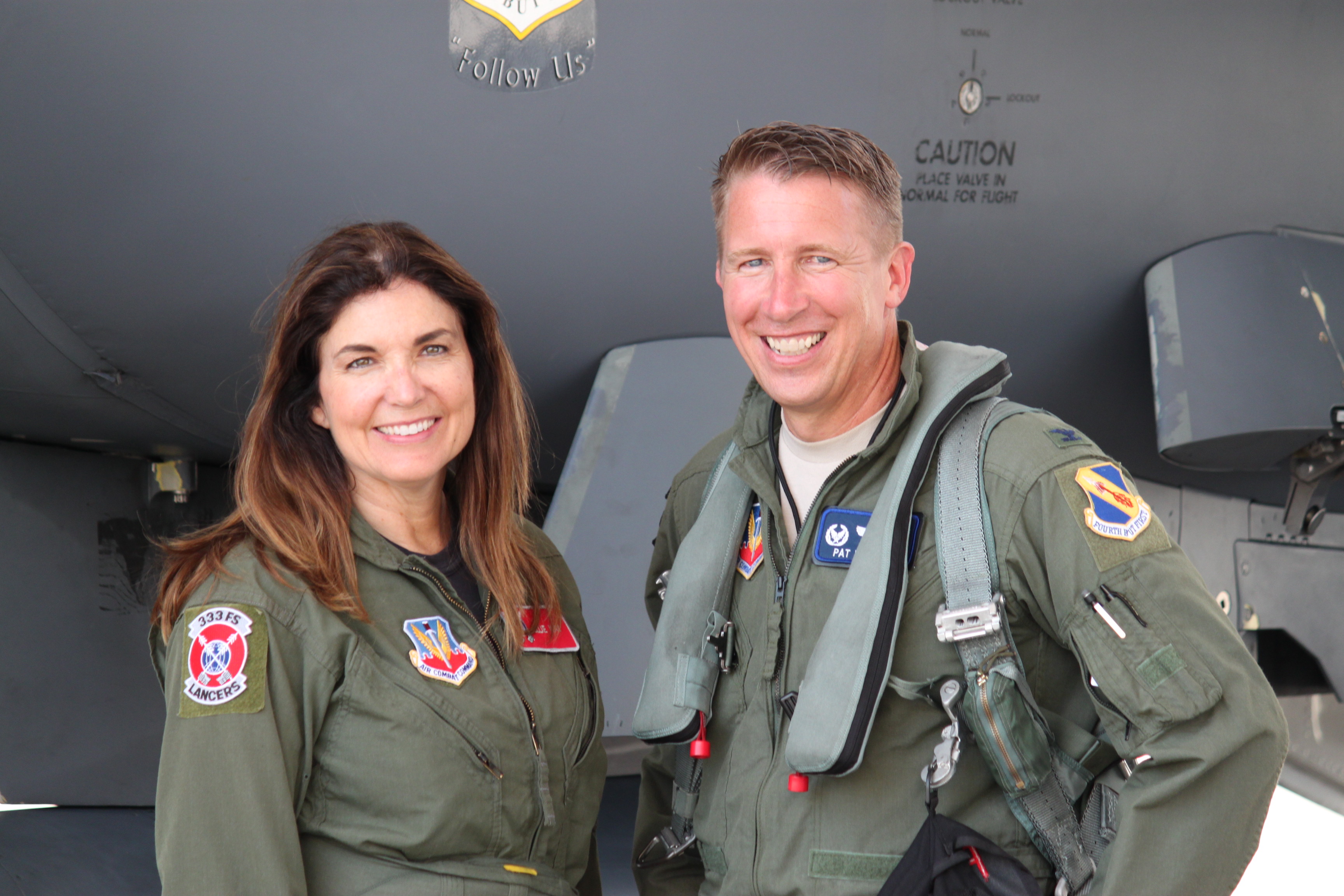 I went to the flight surgeon, egress training and physiology. At the 333rd FS Lancers squadron, we were met by LTC “Rosie” O’Donnell, who took us to briefing that was led by Captain Ryan “Goat” Roper, he told me to think about the mission and how we would fly over Kitty Hawk at 1000 feet and view it from the back seat of an F-15E. His Weapons Systems Officer, Captain Sriram “Fuze” Krishnan, told me to drink a bottle of water after I asked my pilot if I could take off my air mask so I wouldn’t get sick.
Then the big man himself, Colonel Pat “Moon” Doherty, the 4th Fighter Wing Commander, could have been “Cool Hand Luke” because his demeanor was both calming and compelling. He said he knew I’d be fine and I believed him. But when we got ready to step to the jet I noticed something that surprised me about Moon. In fact, I noticed it in all the air crew for our two ship sortie—there was an excited gleam in their eyes. It was as if they were little boys but instead of being excited about playing baseball, their collective countenance said, “we get to go fly jets today!” It was the same look I’d seen on Bob’s face when I watched him launch out into the wild blue yonder.
I put on my g-suit and harness, grabbed my helmet and air mask, tucked in those pesky air sickness bags into my flight suit and we were ready. Excitement overtook me as I realized I was truly going to do this thing—I was going to fly in a no kidding, real world, operational fighter with the second best fighter pilot in the world (Bob always has to be the first).
We signed out the jet, stepped to the hanger, met the amazing maintenance crew, pre-flighted the aircraft, strapped on 30 tons of sheer power, and taxied down the runway. At the end of the runway, while we waited for clearance to takeoff, Bob and Joshua met us in a truck and took a gazillion pictures. There was a wistful look on the World’s Greatest Fighter Pilot’s face. He never would have dreamed that his wife would fly in the one fighter he had always wanted to pilot, but never did.
Moon and I were cleared for takeoff and we watched Goat and Fuze roar down the runway and head into a vertical climb. Then it was our turn, no going back now! As we blasted down the runway, the afterburner screaming, we took off on the wildest ride I’ll ever had this side of eternity. We pulled about 5 g’s in a straight vertical climb and then a sharp turn out to sea. The one hour car drive to the coastline took 8 minutes. It gave a whole new meaning to the bumper sticker that says, “If I were in my F-15E, I’d be there by now.”
Fuze snapped photos of us airborne as we rose above the clouds. Moon asked what I wanted to do as he didn’t want to push me. But I was game for low levels, aileron rolls and what I call the loop-de-loop. I battled airsickness by doing every I’d been trained to do to avoid it—and Moon was right, I was fine.
We flew a formation approach (ten feet from the other airplane), then flew back out in the traffic pattern for a couple more approaches. After 1.7 hours of flight time, we could say, “The Eagle has landed.” I was beyond euphoric to have flown in this premier jet with a big time pilot and not get sick. We taxied back to a cheering crowd and when Bob learned that I held down that wonderful breakfast that Dee Dee Doherty made us earlier in the day, he gave me the highest praise that could ever come from a fighter pilot when he declared in all seriousness, “Beloved, I am as proud of you today as I was every day that you gave birth.”

****************
I learned some things on the hot tarmac on that humid North Carolina day. For one thing, we have the finest group of military professionals in the world. Each team member I met that day was very secure in their place on the team and performed their duties with pride and professionalism.
I learned that big boys still act like little boys when they get to do what they love.
I also learned why Bob loved his work for 30 years and how hard it was for him to have his feet on the ground.

But most importantly, I learned that as much as my man suffered from clipped wings, his love for his wife and excitement over her living out a bucket list dream was greater than any thing else.