How do YOU Spell Stress Relief?

I had five children in the first seven years of marriage and moved 11 times in 13 years! During that time frame, my fighter pilot husband was gone as much as he was home, I home-schooled the kids because it was the only continuity they had, and I didn’t have the support or proximity of any extended family members. It was a situation set up for a first class trip to the funny farm!

Some folks turn to addictive behaviors to cope with stress, like shopping therapy (and the credit card debt that goes with it) or overeating (OK, so I’ve been known to wallow my sorrows in chocolate and coffee on occasion).  But I decided to volunteer at the base Family Services Center. They paid for 6 hours a week of childcare for those five kiddies and I gave back to the military community in a productive way instead of drowning in the “poor me” syndrome.  I also worked out by walking the kids at the park or running early in the morning before my husband left for work. We were on a tighty-tight budget at that time, so these stress relievers were within our spending plan because they were FREE.

How do YOU reduce stress without breaking your budget?  My son, Jonathan, is a freshman (doolie) at the United States Air Force Academy, and it’s an incredibly rough first year at that fine institution. They get broken down and built back up as a military team. But they also find brilliant ways to reduce stress. One of the biggest weekends in a “doolie’s” life is 100’s night. This is when the seniors (firsties) have 100 days until graduation. They find out their bases, and they all go out for 3 days to celebrate. It’s tradition for freshman to “decorate” their room. The more you destroy it with a theme, the more respect you show to that senior. For Cadet Owen’s room, Jonathan & friends used 300 pounds of rice, and random stuff including marble strips from the Terrazzo (the main walk area at the Academy) for a Zen garden. Jonathan, et al, also created a tennis court in another room complete with artificial turf, foul lines and a net. There was a “pond” with water and 15 goldfish (for the class of 2015). The photo shows a VW bug that was purchased from salvage and reassembled in a senior’s room. Another senior staff member had his room dry walled shut—the hallway was one straight wall, instead of an alcove going into his room. He had to destroy the new “wall” to get in! 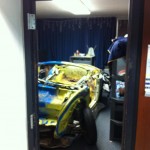 A lot of de-stressing military stories are told in my new, 3rd edition of Heroes at Home, some are so very creative! Here’s one of my favorites:

Tom Neven, a former Marine, is currently an author and freelance writer. He tells the story of when he was stationed in Okinawa at Camp Hansen with the First Battalion, Fourth Marines. Someone broke into the provost marshal’s office, where they had an audiotape player that broadcast the national anthem and “Marines’ Hymn” at 0800 every morning. The “criminal” substituted a Led Zeppelin tape. At 0800 the next morning, as each unit was waiting to raise the morning colors, a raucous “Whole Lotta Love” blasted across the base instead!

What do you do to de-stress? Today, I still walk, volunteer, spend time with friends and I also love getting spa treatments and I never pay full price. In fact, I subscribe to the local deal site, Local Living  to get an $85 massage for $33 or a $45 pedicure for $18. So be sure to check with your local group buying site to save money.