Deployments and Random Acts of Emotion 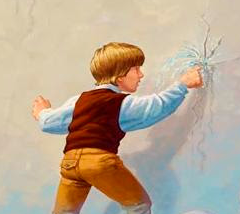 I consider myself a fairly tough gal. I mean, my kids know that “mama rarely cries” with the exception of watching “Undercover Boss.” Who can keep your emotions in check when Igor from Russia gets his own 7-11 franchise? But it was a pretty big deal in our house if one of the kids made me cry. Even today, if my Marine hears that one of his little brothers made mama shed some tears, then they’d better run for cover because he’ll take them down with only a rubber band and a paper clip.

But sending a family member away to a deployment is a different situation entirely and even though I may not sob buckets of tears, these deep seeded emotions have a way of bubbling to the surface like the tar in the La Brea Tar Pits.

When we sent our youngest to join the Army at USMA last year, I was grocery shopping the following week and got to the peanut butter aisle. I remembered we were out of crunchy peanut butter. But then I suddenly remembered, “Joshua is the only one who eats that peanut butter and he’s gone into the Army now.” To my horror, I started crying right there in between the JIF and Peter Pan!

This past week, I went to mail a package on July 3 to my Air Force son at USAFA and Yoli, the kind postal worker and I got to discussing fireworks. She told me about a customer of hers that said he hates July 4 because the fireworks bring back the memory of combat. This reminded me of my boy and I quoted a Facebook post, telling her “we live in the land of the free because of the brave.” She agreed, which only encouraged me to quote a Navy Mom tee-shirt I saw on Instagram that said, “Some people only dream of meeting their hero, I raised mine.” The only problem was that I got halfway through the last quote and burst into sobs, turning on my heel and leaving Yoli in my trail of tears.

I’ve got to stop quoting social media and tee-shirts.

The worst example of these random acts of emo was when I went into Bed, Bath and Beyond to work my signature magic and get some great deals by using a 20% off coupon (did you know BB&B takes expired coupons?) and then combine that with a $5 off $15 purchase or more coupon. They have always taken both coupons. But on that fateful day, the new clerk, Thomas, handed me back the 20% off coupon and innocently commented, “I’m sorry, we can only use one coupon.” It was as if Thomas was the little Dutch boy who took his finger out of the dike and the waterworks started flowing.

I tried, as hard as I could to regain my composure, but I just couldn’t stop crying. Thomas called over the manager who took one look at me and said that they COULD take both coupons after all, but that only made matters worse.

Between gasping for air and wiping my nose I tried to explain, “It’s…” sniff, sniff, “just that I have a Marine…in Afghanistan” and sob, “he’s ok, but…”

I grabbed my bag of Keurig coffee pellets and left abruptly. Poor Thomas.

I believe the moral of the story is that it’s probably better to talk through the emotions we have during deployments with a trusted friend, a chaplain, a MFLC (Military and Family Life Counselor) or even your puppy dog. But it’s never OK to work through these emotions with your deployed military member because it only makes him worry about you. In fact, it can lead to safety issues because it might make them distracted with concern for your emotional well-being.

Remember to always be encouraging and positive when sharing with a deployed family member. Share stories about the puppies, or something you did that you were proud of (like my friend Keri who jump started her car by herself while her husband was across the ocean). Give them something to look forward to when they get back home, like a trip or a project you can do together. Tell them you love them and are proud of them.

Stay strong friends, and please know that the sacrifices are worth it. We love you, we are proud of you, and together, we are all going to be alright.