“Joshua,” I said as I looked at my four-year-old son who was staring at 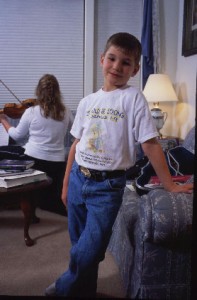 himself in the upstairs bathroom mirror. “Earlier today, you told the postman you were smart, then you let the grocery cashier know you were good at sports and now you’re looking at yourself and telling me how handsome you are.”

“Yep, that’s right mama,” he smiled at his reflection.

“Well, son, it is good you believe good things about yourself. But there is a difference between ‘confidence’ and ‘arrogance’ and we want you to be confident. But, son, if you tell other people how great you are, then people might think you are arrogant, and that’s not good.”

My super aggressive and busy little boy scrunched up his forehead, thought about what his mama just told him, then brightened up and announced, “Well, Mama, then I’m arrogant, because I KNOW I’m smart, I KNOW I’m good at sports and I KNOW I’m handsome!”

This “Joshua story” is one of the many kid stories I told my husband Bob, when he was deployed with a unit from Fort Drum and was far from home. He roared with laughter and it made his day.

There is an incredible value in sharing what might be perceived as the common details of daily life with our deployed family member.

Here’s a challenge I want you to take the next time you speak with your deployed military member. Are you up for it? I’m not saying you have to do this challenge EVERY TIME you talk to your hero, but just once in a while and see how they react.

The first part of this challenge is on the call with your military member, you are NOT to do any of the following: 1) talk about any problems, 2) ask any questions about the negative issues they’ve had over there that cannot be resolved, or 3) focus on how much time they have left on the deployment.

The second part of the challenge is to take notes during your week and share a story from each of the following categories:

Kid Stories – I just shared one with you as an example. They don’t have to be hilarious, they can just be something commonplace. Write down a cute thing your child or a friend’s child said or did. If you don’t have children, then maybe a pet. My son’s roommate (aka ‘Megamind’) is with him on his current deployment in Afghanistan. This friend has a sweet one-year-old daughter who hasn’t seen her dad for many months. I skyped my son and as we talked about a lot of things, I then asked how the little girl was doing, he smiled, “She’s started opening doors lately and that has Megamind all freaked out.” He laughed out loud.

Obviously, the daddy is proud his precious girl is progressing and he’s happy just thinking about it. You see? Your guy might even share the mundane with his bachelor roommate and bring a smile to others as well.

Movie Line or Joke – Be on the lookout for an instance when you could quote a movie line your family enjoys or a new joke that you know your military member will find funny. We love the movie, Zoolander, and there’s a scene where the male models, Derek Zoolander & Hansel, and are at a party. Their friend, Matilda, in a moment of truth, confesses a dark secret from her past, “I was bulimic.” To which Hansel replies, “You read minds?”

So when I was talking to my Army son, we were discussing something and I said, “I already know what you’re going to say, son. I’m bulimic.”

Friend or Extended Family Member – Our military members like hearing about other people beyond the folks that live in his or her house at home. So have Siri ready to take notes on something interesting or 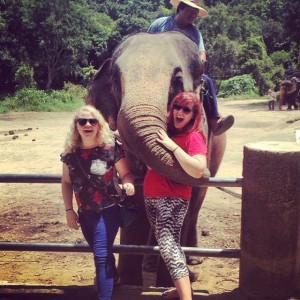 even funny that friends and family are doing. My daughter is on a mission trip to Thailand and got “kissed” by an elephant, which is something she wouldn’t have the time to tell her deployed brother because she’s still traveling. So I told him how the elephant hugged her with his trunk and then “Ollie Kai” gently sucked her neck a couple times, took his trunk and pushed her away with a “smack.” He kissed her teammate the same way on the cheek.

My Marine laughed out loud and smiled when I said I would follow up with some pictures. Ok, an elephant’s kiss might not exactly be mundane, but you get the general idea.

What may be commonplace to us, is not perceived as boring to our heroes on deployment. So celebrate the mundane, write down some of the your daily stories and give your service member hope, help and humor. Oh, and if an elephant kisses you, be sure he promises to keep in touch!

After you take the challenge, let me know the results!