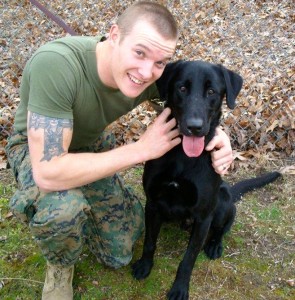 It was late one afternoon when we received an excited phone call from our Marine Corps son. He’d just gotten word that his M.O.S (Military Occupational Specialty, for those unfamiliar with Marine Corps jargon) was changing, and he couldn’t wait to share the news. His new assignment would be that of bomb dog handler. I have to admit that as his mother, I was lot less inclined to celebrate. I wanted my son as far away as possible from bombs—not guiding a dog whose primary mission was to find them.

But despite my misgivings, I knew being assigned as a handler was the perfect fit for our rough-and-tumble Marine. He’d had to leave the dog he grew up with at home when he enlisted in the Marine Corps. I knew how much he still missed having a dog around.

So the weeks turned into months as Jimmy learned all about these amazing animals. Finally the day came when he was introduced to the dog who’d become his friend and his partner. Seger exploded into his life like a dark, furry tornado. One thing our son had learned was that the dogs are carefully matched with the handler’s personality. When I heard that, I knew what kind of animal Jimmy would be assigned. And sure enough the dog, like the man, didn’t know the meaning of the words take it easy, can’t or relax.

These two quickly became inseparable. We loved visiting on base so we could watch the relationship between canine and handler. Then it was off to more serious training missions and these two began to have more opportunities to test the bonds of their partnership.

I had already come to love the effect this big black lab had on our son. Jimmy was more laid back and easy going now that Seger had come into his life. His fiancé and I both remarked on the noticeable difference. But it was on their final training mission before leaving for Iraq, that we discovered the depths of this dog’s devotion to his master.

Jimmy and Seger had been left in the desert over night and the temperature dipped far below what had been expected. My son began to slip into hypothermia, despite all the precautions he’d taken. As he became groggier, hovering near unconsciousness, he realized Seger had been busy. The dog had dug a hole in rocky ground and proceeded to push a barely conscious Jimmy into it. After the dog had his master settled, he crawled on top of him, keeping him warm with his own body heat through the frigid night.

The next day the patrol picked up the two, with neither one suffering lasting harm. As for me, this was what I needed to be able to let Jimmy go back on deployment with a sense of peace. God had showed me that He had placed a very special guardian over my son. I took comfort in that fact, able to face his second deployment with the knowledge that God truly was in control.

Edie Melson is the author of four books, including Fighting Fear: Winning the War at Home When Your Soldier Leaves for Battle. She’s also the military family blogger for Guideposts at While They Serve. Her popular blog for writers, The Write Conversation, reaches thousands each month, and she’s the co-director of the Blue Ridge Mountains Christian Writers Conference. Connections: Social Media & Networking Techniques for Writers is a print expansion of her bestselling ebook on social media. She’s the Social Media Mentor at My Book Therapy, the Social Media Director for Southern Writers Magazine, as well as the Senior Editor for NovelRocket.com. Connect on Twitter and Facebook.
Share this
0 likes
Related Articles