When Our Heroes Come Home: 7 Things to Remember 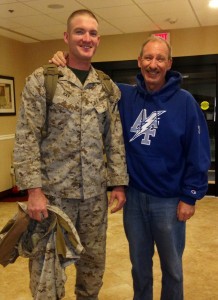 “How is Philip?” I heard for the tenth time this week and it always brought a sense of anticipation and joy to my heart.

“He coming home in nine days and 12 hours” I replied with a big smile.

Then I can breath again.

Then my heart will be home again.

Then I can relax… for a while.

In the USMC, they call it “redeployment” when our Marines come home. And here’s what we know about redeployment: times are uncertain, and we have to remain flexible.

I remember speaking to the Stryker Brigade in Alaska a few years ago when the Army troops had been deployed for a year and then half of them came home—and went back for three more months. But the other half just stayed over there for the next three months.

What would be better, in your opinion, for your servicemember to come home for two days after being gone a year, then leave again for several months? Or do you think it would be less stressful on you and less confusing on the kids to just have them extend without coming home?

When our heroes come home again, here are some of the things we have to remember:

The Five Emotional Stages of Deployment

Well, now it’s only 9 days and 10 hours until my Marine comes back home.

Let me hear from you and tell me, “How do you celebrate your hero’s homecoming?”