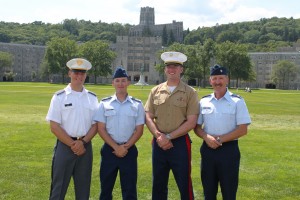 Last year, our son, Joshua received an appointment to Westpoint, thus creating what we call a “Trifecta” amongst our military sons. They are following in their
father’s footsteps (Bob, USAFA class of 1978). We have a Naval Academy grad (Robert Philip, class of 2011) who is a Marine; an Air Force Academy cadet (Jonathan, class of 2015), and now the baby at the United States Military Academy (class of 2017). We are proud but confused because we never know who to cheer for at service academy football games!

Let me stop and issue a disclaimer to the other Kay kids (since there are seven) and say that we are proud of all of our kids and their life achievements! Daniel (University of Texas at Arlington), Bethany (Moody Bible Institute), Missy (Columbia) and Mandy (Cal State Fullerton). 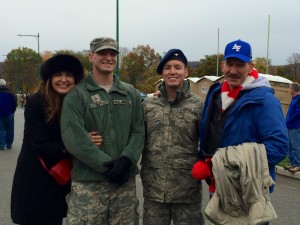 But this particular blog is about Veteran’s Day and an update on the Trifecta boys. Who would have thought that all those busy boy days playing army, pilot and sharpshooter would have produced such a burly crowd? When Army played Air Force last week, we flew out to West Point and after the game, while we were visiting the hosts at OCF (Officer’s Christian Fellowship), the two boys got in yet ANOTHER wrestling match and I COULD NOT STOP THEM, no matter what I threatened. I finally proclaimed:

“Both of you together still can’t take your Marine brother. A man who has been to combat and been through IOC in the Marine Corps.” 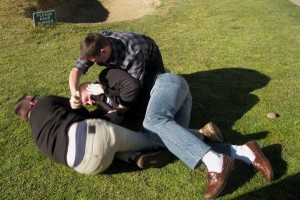 At least they stopped wrestling for a bit, but they both started shouting things like, “You wait until Christmas, we will show you we can take him!”  And then, “You better clear out all the breakables in the living room because there will be no holds barred.”

But having multiple sons in the service during this Veteran’s day isn’t fun and games.

There’s real war out there and one of my sons has seen it already and will see it again in 2015.

There are real sacrifices made by our Vets and their families daily.

There’s a real need for us to say “thanks.”

There’s a fantastic America who rises to the challenge and helps our military and their families.

Thank you America for thanking our Veterans for their service not only today. But every day.

Oh, and I’ll keep you posted on who wins the wrestling contest.