The Next Step in the Trifecta Effect 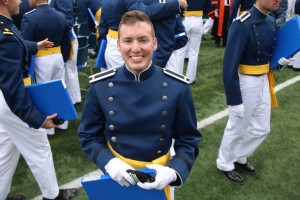 In November of 2014, I first blogged about the fact that we are one of the few Trifecta families, in regards to military academies, in the entire country.

This Trifecta was complete when our son, Joshua received an appointment to West Point, thus creating a Trifecta amongst our military sons. They are following in their father’s footsteps (Bob, USAFA class of 1978). We have a Naval Academy grad (Robert Philip, class of 2011) who is a Marine; an Air Force Academy graduate (Jonathan, class of 2015) and now the baby at the United States Military Academy (class of 2017). We are proud but confused because we never know who to cheer for at service academy football games!

Let me stop and issue a disclaimer to the other Kay kids (since there are seven) and say that we are proud of all of the Kays and their life achievements! Daniel (University of Texas at Arlington), Bethany (Moody Bible Institute), and Missy (Columbia).

But this particular blog is an update on the Trifecta boys. Who would have thought that all those busy boy days playing army, pilot, and sharpshooter would have produced such a burly crowd?

The second major step in this journey was secured last month when Jonathan graduated from the Air Force Academy. When his hat flew in perfect synchronization to the five ship of Thunderbirds flying overhead, we knew we could rest easy that his journey at the Academy was complete.  The USAFA paper wrote an incredible article about his pathway through the Academy.

But having multiple sons in the service isn’t all fun and games.

There’s real war out there and one of my sons has seen it last year in Afghanistan and this year as well in other locations overseas.

There are real sacrifices made by our Vets and their families daily.

There’s a real need for us to say “thanks.”

There’s a fantastic America who rises to the challenge and helps our military and their families.

Thank you America for thanking our Veterans for their service every day.