In my book, Lean Body, Fat Wallet, we learn that the habits that lead to health also lead to wealth. Let’s look at one of those habits today.

In ages past, it was much more difficult to satisfy our cravings and urges. There were no fast-food restaurants or all-night minimarts to which we could sneak out at any hour and load ourselves up with junk food galore. There were no shopping malls or endless selection of specialty shops where we could shop to our heart’s content. And there certainly was not television to tempt us with tantalizing commercials or access to the worldwide web where we could exercise our need for retail therapy 24/7. Yes, in simpler times it was much easier to avoid temptation.

This habit is an excellent temptation deterrent strategy to help you navigate the frequent impulses we all encounter from time to time. This habit is described with three Ds that are easy to remember. Each stands for an important and effective strategy for changing your bad habits into healthy ones: determine—distract—delay.

Whenever you realize that you are going to be in a situation that may challenge your resolve to stick to your new financial plan, determine beforehand how you are going to handle it. Rather than just respond to situations as they emerge, give some forethought to common and occasional circumstances that may test you. You can practice new strategies to distract yourself from the temptation and to delay gratification until the time you decide is appropriate in light of your desired goal.

WEALTH AND THE 3D HABIT

Samantha was a chronic shopaholic who was a sucker for a bargain even when those bargains threw her off budget. Since she was single and didn’t have the accountability of a husband who shared the debt and frustration of a growing credit card bill, it was easy to live for the moment and worry about the money later. After attending one of Ellie’s financial seminars, she decided to apply the 3D Habit to her spending practices. Here is what her process looked like:

Determine to Be Accountable

Samantha decided that making herself accountable to her best friend, Katherine, would help her stop impulse shopping. Her friend agreed to call her once a week and ask her what bargains she bought online, at the mall, or on her phone. She also began to track her spending on Mint in order to be accountable.

When Samantha encountered an irresistible bargain, red sale tag, or 20-percent-off savings, she took a few seconds to text her friend: “I’m being tempted.” She also chose to focus her mind on her new goal of paying off her debt and thought, If I don’t spend twenty dollars on this bargain, that’s twenty dollars I can put toward my Visa bill. These tactics were effective enough to distract her from the impulse to spend.

If the item really was a bargain, she truly needed it, and it was within her budget, she took a photo of the item, noted the day the sale ended, and sent herself a calendar alert to reconsider the purchase before that date. She said that nine times out of ten, this final habit of delay was sufficient enough to help her see that even though the item was a bargain and within her budget, she didn’t really need it and could pass on it when she had the benefit of time and space away from the impulse urge.

The Payoff of the 3D Habit

When Samantha first began the 3D Habit, it felt awkward and cumbersome. After all, she felt a little odd making herself accountable and texting her friend when she was tempted to make a purchase. But she was determined to pay off her consumer debt and build a cash reserve. She said, “The temporary discomfort involved in breaking a bad habit was replaced by the permanent joy of reaching my financial goal.” In fact, her accountability friend noticed the transformation in Samantha’s spending habits and decided to apply this effective new habit to her desire to become more physically active. Katherine developed a new habit of walking three times a week in the process. Both friends are happier, healthier, and wealthier due to the mutual accountability they applied to the 3D Habit.

It is easy to apply this habit to all aspects of your financial life, from learning to be content with the money you currently make, to being able to stick to your family budget. By practicing what the late Stephen Covey taught in The 7 Habits of Highly Effective People and “beginning with the end in mind,” you can go a long way toward recognizing the value of implementing the 3D Habit into your daily life every time a temptation arises that veers you off course.1 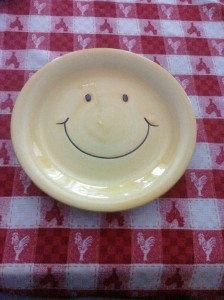 One of our family’s traditions was to eat on “happy plates” when something good happened to one of our family members. Financial success helps us follow the three 3D habit as we determine that our overriding goal is more important than an optional item that isn’t going to get you to that debt-free vacation. We choose to distract ourselves  by saying, “It’s not in the budget” and delay the urge by saving for that item instead of charging it on a credit card.

A DELAY A DAY KEEPS POOR DECISIONS AT BAY

Make a life decision to practice the delay step of the 3D Habit as part of your normal way of life. Commit to delaying emotional indulgences even if only for a few minutes in order to ask yourself some defining questions before taking action. For example, “Does this purchase move me closer to my goal?” “Will I feel good about this decision an hour or day from now?”

Practiced over and over, this strategy will become an ingrained habit that protects you from regret and helps you find creative ways of designing a lifestyle that is closely aligned with your core values and interests. It’s wise to remember this simple statement: “When in doubt, don’t . . .” Instead of taking immediate action, delay what you’ve decided (in advance) in a wise time frame. Then, once that time has passed, decide if taking action is a wise choice.

How can you apply the 3D habit to your life?