Are You A Helicopter Parent?

I’m the parent of enough Millennials to make up our own basketball team. One of the main characteristics of this generation is that they have “helicopter parents.”  These are parents that hover, trying to make life easier for their child and never quite allowing them to fail.

The problem is that Helo parents do their children more harm than good because once that young adult launches into the real world, it’s hard for them to do things without mom and dad. Or, they doubt their own ability to have their own accomplishments. 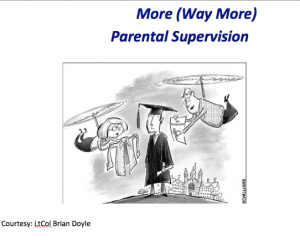 st weekend, I had the privilege of addressing 600 prospective #USAFA candidates and their parents. In these settings, I usually wear three hats: 1) Admissions Liaison Officer , (ALO) someone who helps students in the admissions process to the Air Force Academy, 2) All Academies Congressional Panel a selection board that decides who gets nominations from a specific Congressional District, and 3) Cadet/Graduate Parent, we are parents of a graduate and former Presidents of the USAFA Parents club. They asked me to speak as a parent at this event.

So I chatted with 600 new friends and while I described the characteristics of a helicopter parent, some of the parents began to squirm. It’s not that helo parents don’t want their kids to succeed, it’s just so hard for them to let go. Sometimes, parents don’t even realize they are hovering. One of my fave Ronald Reagan quotes is, “Trust but verify.” My kids have heard me quote that saying way too many times. A helo parent usually can’t get past the first part of that phrase.  But if they do, then they hover and it becomes, “Trust, but micromanage-and-follow-up-ad nauseum-in-order-to verify.”

I had a great prop from Party City that is an army helicopter where you push a button, the wings whiz around, and it lights up. Then there’s candy inside–pretty sweet, right?  I decided to push some buttons with the following questions, allowing the parents to answer whether the answers indicated a Helicopter Parent or not. The “flight manual” is listed at the end of the quiz.

If you answered “yes” to these questions then:

Q1:  You are a helo parent. Students need to own their own future and college is part of that future. As an ALO, if one of my candidates can’t handle the application process, then they can’t handle going to USAFA, because these go to the top 5% of students in the nation and have an estimated value of 425K. Bob and I, have seen students land at USAFA when they didn’t want to be there and even try to take their own lives because they couldn’t go home and disappoint their parents. That’s an extreme example, but also true.

Q2: It’s not helicoptering to offer suggestions for the child to do the work and make it better. You may remember something about their experience that would work well in the essay that they’ve forgotten. But making suggestions or inputs is OK. Writing it FOR them is not OK.

Q3: Whirr, whirr, whirr. If you ask all the questions and your child appears to be mute, that’s some heavy duty helicoptering going on here. Stop asking all the questions. At the very least, ask your child to ask some of your questions in front of the group of 600, it’s a good experience for them and they are owning part of the process.

Q4: This is the subtle kind of helicoptering that gets most millennials in trouble if the parents are in charge of these aspects of their lives. The students need to be the ones who know where they are at and you need to let them have the freedom to fail if they can’t or won’t do it. Reality is a harsh teacher, but micromanaging their every step is an unkindness to them if they don’t learn how to stand on their own. If you beg to argue with me, then show me your basketball team of successful young adults and I’ll show you mine.

Q6: You’re OK if you trust but verify. Let your kids know that you trust them to do the work, but if a great President like Ronald Reagan could “verify” the work has been done, then so can you.

So are you a helicopter parent? Did you have a helo parent?

I’d love to hear from you!