LEAD is Not A Four Letter Word – part 2

Last week we talked about how every motivated person can become an effective leader by learning the steps involved in how to L-E-A-D and we covered the fact that “L” is for loyalty and “E” is for enthusiasm. Today we’re going to pick up with the letter “A.” 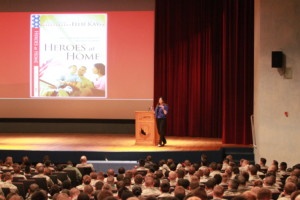 A is for Adversity

Truly effective leaders accept adversity as a condition of getting the mission done. I have never met a successful person who hasn’t had a lot to overcome a great measure of adversity. Don’t be afraid of adversity—handled properly, it makes you stronger. It helps you grow. Problems and people can’t stop you. The only thing that can stop you is you.

I remember a particularly difficult event when I had to substitute for a former First Lady of the United States at a large speaking event. The event was held in San Antonio Sea World Shamu-atorium. The Secret Service could not guarantee the former First Lady’s safety so they would not let her present at this military audience “Spouse of the Year” award. 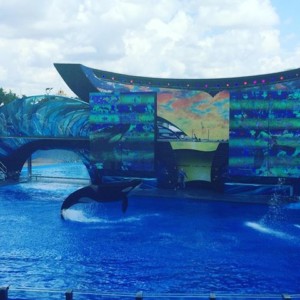 The audience was tired and cranky after a long day at Sea World. They had kids that were eager to see Shamu and they had to hear me give a 25 minute “Heroes at Home” speech first. Plus, they were expecting the First Lady and they got me! It was a set up for failure.

I began the speech and the acoustics were horrible, with a huge echo designed to announce, “And here’s SHAMU!” Those microphones were not designed to hear a speech, no matter how compelling. My enthusiasm remained high, but the audience was not warming up. All of the sudden the crowd yelled, “WOW” and “AHHH.”

I thought, “Maybe the audience is turning around and getting on my team.”

The audience soon reverted back to hostile looks and crankypants kids. Suddenly, the previous reaction was repeated when the crowd shouted “WOW” and “COOL!” It was then I turned around to the large tank of water behind me and saw Shamu go back in the water. Apparently, he was swimming the full length of the tank and would break up out of the water at just the right moment!

Adversity means that we begin to view Murphy’s Law (what can go wrong, will go wrong) as a good thing—it can grow us. Adversity means we need to have wisdom in leadership positions to know when to fall on our swords and when to take a more subtle (but effective) approach.

For example, on one of my teams I had 70 year old woman, who was scared spitless to speak in public. As a leader and with the help of the informal leaders on the team, we not only helped her overcome this near phobia to become a speech contest winner.

WHAT IS ONE WAY YOU HAVE OVERCOME ADVERSITY?

D is for Determination

Determined people, particularly determined leaders posses the stamina and courage to pursue their ambitions despite criticism, ridicule or unfavorable circumstances. In fact, discouragement usually spurs them on to greater things. When they get discouraged, they recognize that in order to get different results, some change is required. Determined people also display another “D” trait and that is discipline.

In the process of earning my Accredited Speaker designation, I had to present to an audience of 3000 speaking peers at Caesar’s Palace in Las Vegas. There were three jumbo-trons behind a 150 long platform and it was streamed worldwide thousands more people. The night before, I realized that I had to change the first two 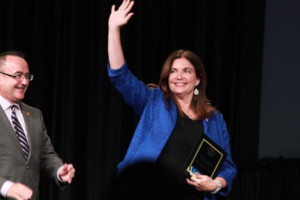 minutes and I practiced those two minutes 60 times the night before the International Event. Yes, I practiced for two hours in the middle of the night! But the hard work paid off as I was the only finalist to pass the final level the next day, out of 400,000 speakers worldwide in various clubs.

Determination means that just because we can’t do everything we set our mind to, doesn’t mean we can’t do something.

Where do you need to be even more determined?

I believe that every motivated person can become an effective leader by learning the steps involved in how to L-E-A-D:

Loyalty – the ability to both give and inspire loyalty

Enthusiasm – following your passions so that it is contagious

Adversity – helping others to overcome obstacles as you lead by example